Here are some of the books I recommend to students of adobe.  Links to book covers and purchasing options can be found on the “Library Shelf” page.  FYI, for many of the older books, Abebooks.com is a more useful (and often less expensive choice) than Amazon.

ADOBE~ build-it-Yourself by P.G. McHenry, 1973, University of AZ Press. “Buzz” McHenry, as we knew him, was a mid-western contractor who became a student to Adobe and a lic. Adobe builder after his family move to NM. He traveled to the Mid-East, studying adobe vaults and domes prior to 1979. He authored the title above which was the first contemporary step-by-step guide to building your own by a professional . It became a best seller around the Southwestern Region. The book was written before the oil embargo of 1973/4 which launched passive solar techniques, so it is not valuable from that perspective. McHenry served on code committees and was an effective ambassador for earthen construction. His book is directed to the average person and a simple, cost-saving approach.

Adobe Houses For Today by Alex and Laura Sánchez, 2001, Sunstone Press. Alex Sánchez is one of the first group of passive solar~adobe designers dating to the late 1970’s near Los Lunas, NM. His wife Laura, a custom home drafter, is perhaps the top Auto-Cad draftsperson for Adobe, one of the few who has managed to refine autocad into a more “artistic” appearance, similar to the hand-crafted drafting of an earlier day. Together, this dynamic duo has produced the book above, which not only is a great teaching tool for Passive Solar Design, but gives the reader access to an assortment of reasonably-priced plans for adobe homes. Alex teaches Auto-Cad today at the Valencia Campus of the Univ. of NM.

Fires are not built in the horno for bread baking, but inside a sort of metal screen container that allows the cook to extract the hot, coal filled basket and then insert the shaped dough loaf, loaded onto a wide, flat, bakere’s paddle.  Both tools have long hanldes and cleaning is also done with a long stick or pole on which is wrapped a wet cloth for swabbing the horno interior.  The test the horno for the right temperature, crinkle a fist sized pieces of newspaper and place in the horno.  If it bursts into flame, the hono is too hot.  If it smolders, with the ends of the paper tuning black, it is about right.  A dozen chocolate chip cookies in 8 minutes cooking time would be typical.  Hmmmmm, good!

I hope you found this blog to be of interest.  Of course, I’d like to refer you to a link to my Adobe on-line magazine, still free for now.  If you want to go beyond horno into home construction, Adobe builder is your ticket.  We hope you’ll try it and report back to us.

As Adobe has become popular in the Southwest, the horno was never far behind as a peripheral addition to the adobe pastoral.  Builders and realtors discovered that having an horno sitting by the house added to home value and increased sales.  Their pleasing aesthetic, with the classic round dome shape, along with bancos or adobe benches becomes an extension to the kitchen and adds outside living area that all can enjoy.

There is a more sobering reality to the horno.  Its pleasing air of substantial informality disguises a vital survival fact.  If the electricity goes blink, or the propane runs out, or the natural gas freezes in the pipes (as it did in Albuquerque in 1970), your horno becomes a survival tool.  As long as you can find wood, you can bake bread or cook meat.  It was always that way, not so long ago.  Today, no utility can guarantee that their power will be %100 at all times.  I heard two old ladies chattering in the post office the other day, worried about whenther their propane supply would last until the next social security check came in.  One of them lamented selling the old family adobe with its horno and commented that her ‘modern’ mobile home uses too much energy to heat and cool.

Horno cooking is mostly by radient heat, built up in the adobe mass,.  There are different hornos for different foods.  I like the analogy about the three bears.  The papa bear or big horno for cooking meat, the mama bear or middle-sized horno for baking bread and the little bear or baby horno for cookies, pastires and chile preparations.

One thing you’ll learn about Adobe is that it has a big tie to the kitchen.  It’s a recipe-driven technology and uses a lot of kitchen-sized implements and tools.  It also has that air of secrecy associated with cooks.  Some builders have always guarded their alleged secret recipes.  I say alleged, because after about 1970, most of the ‘recipes’ were being published in how-to books.  But today, a new brand of green builders do jealously guard their sauces, even if the general ingredients are known.  W really see this with builders who are trying out friendly chemical additives, especially those related to green building.  But when it comes to the horno, less is more.  You really don’t need anything that outgasses or could negatively affect the bread of dishes you will be preparing in it.  In fact, to be sure, you are likely to make your own adobe blocks and prepare you own mud mortars when building your horno.

The adobe horno (pronounced “or-no”) was  introduced to New Mexico back in the mid-1500s by the Spanish explorers and colonists.  Evidence of them has been found at Coronado’s first large encampment at Bernallilo, north of Albuquerque.  I will have further details about their history in a coming article in Adobe Builder, but for reason that are diverse, the horno traditions today is largely maintained by the Pueblos or Native American tribes located along the Rio Grande Valley in New Mexico (and also at Acoma and Zuñi Pueblos in NM and Hopi Pueblo in AZ).  For example at Isleta Pueblo, just south of Albuquerque, over 30 families are horno bakers.  If you know the places and times, you can pull up to a bread stand, and drive away with a tasty loaf ($3 to $3.50), still warm from the adobe oven.  Some bakers bake every day, and then take their product directly to a roadside stand location and to some store outlets.  If you’re in the area, call Tim or Jenn Lente at Isleta Pueblo (505-450-8756) to discuss their oven bread, pies, sweet breat and Dough-2-go services for special occasions.

Next week, more about the horno… 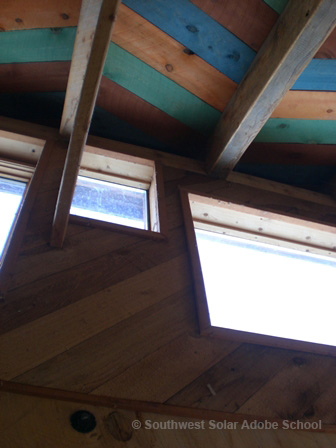 © J.M. Tibbets. Please do not copy, transmit or repost images or text without written permission. Thank you for respecting this request.
Adobebuilder

Promote Your Page Too